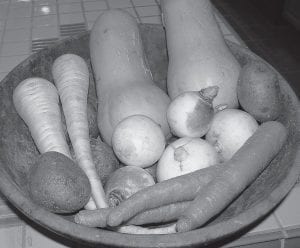 These vegetables put the “comfort” in comfort food. They are excellent, whether roasted, pureed, mixed into a stew, or added to a soup.

Kale, winter squashes, and root vegetables store well over the winter. They were traditionally kept in a root cellar, a structure made within a tunnel in a hillside that was reinforced with stone masonry, then later, brick. The cool air would provide safekeeping for the produce, and the cave was impenetrable to animals and the springtime’s increasing heat.

History tells us that root cellars can be traced back for 40,000 years. They were mentioned in 17th-century English writings. Houses in colonial New England would use the crawl spaces underneath to store not only vegetables, but also homemade brews such as beer and wine. Of course, today we have refrigerators, which are convenient and work well, but lack charm. 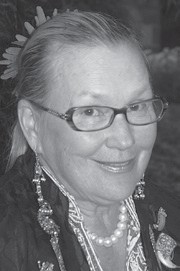 Cynthia Gibson is a gardener, food writer and painter. She gardens and tends her miniature orchard in Newport.

Fruits usually had a separate cellar of their own, as a squash or onion gone bad could easily taint an apple. The stink would permeate the apple’s skin and render it inedible.

Root cellars survived into the 1940s and 1950s, even after many homes were using an icebox, or “ice safe,” which towns kept supplied by carving ice from ponds and delivering it to residents. In Newport, the town ice source was Spring Pond, which supposedly had the clearest and cleanest ice from rainwater and winter runoff. The pond no longer exists, as it was located at the site of my current orchard.

One of the prime vegetables for winter storage was the turnip. It came into its own during the colonial period in America after English and European settlers brought it to our shores. Turnips became a mainstay that helped the colonists get through the long, cold winter months. Once it was discovered that turnips made good fodder for livestock, they were grown and stored by the tons. Unfortunately, the “lowly” turnip eventually got a bad rap at the dinner table. However, today they are still enjoyed in stews, particularly those made with mutton, lamb, or kid.

On a cold winter’s evening, a hot and hearty lamb stew really fits the bill. With St. Patrick’s Day right around the corner, it might be a perfect alternative to corned beef and cabbage.

Preheat oven to 350 degrees. Place the flour and a teaspoon of salt in a large bowl and mix with your hand. In small batches, toss the cubed lamb into the flour and thoroughly coat it.

In a large cast iron casserole dish (Le Creuset works beautifully for this stew) or heavy frying pan, heat 2 tbsp. of olive oil; do not let it start smoking. Keep the flame low. Brown the cubes of lamb and put them onto a plate. Repeat the process until all of the lamb is doused in flour and browned. Each small batch should brown in about six minutes. As the flour will absorb the olive oil, continually add 2 tbsp. of oil with each new batch of cubed lamb.

Return all of the lamb to the deep casserole dish. Add the wine, sherry, and vinegar and bring the mixture to a boil. Add the chicken stock and tarragon and bring the stew to a boil for a second time. Then, place the lid on the casserole dish and carefully place into the oven; it will already be scalding hot. Leave it in the oven for one hour.

After one hour, remove the stew from the oven and add all of the vegetables. Do not add the parsley. Place the casserole back in the oven for another hour and a half.

Check the stew with a fork after the time is up. If the lamb flakes from your fork, the stew is done. If not, give it another half hour. Cooking time will be determined by the quality of your lamb.

After cooking, add salt and freshly ground pepper to taste. Place in deep soup bowls and garnish with the chopped parsley.

The broth will store very well in your refrigerator. There is no need to add ice.