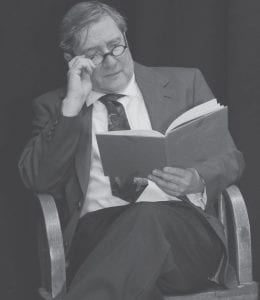 Thirty years ago, Rob Reimer directed the one-man play “Clarence Darrow.” Over the next two weekends in the burgeoning black box theater within the Edward King House, Reimer will this time play Darrow. His perspective on the role has changed over three decades, and not merely because he is directing himself.

His hopes, dreams, aspirations, political leanings and opinions about who we are and how we got here all influence how he will play the challenging role of, arguably, the most famous attorney of the 20th century.

“I have a deeper understanding of life from this vantage point,” he said. “Obviously, it’s much different. One reason is age, plus time and experience. But the play is still so relevant. What was going on then, is still what is going on now, just as in another 50 years this script would be interpreted very differently. It’s not strictly a play from the history books.”

Written in 1971 by David W. Rintels, “Clarence Darrow” is based on the 1941 Irving Stone biography, “Clarence Darrow for the Defense.” It was penned with Henry Fonda in mind for the lead. Other notable actors have taken on the challenging role, including Kevin Spacey on Broadway last April.

“Multiple actors have done it, famous, and not-so-famous, like myself,” laughed Reimer. “I haven’t looked up anybody doing [the role] anywhere [on tape]. I don’t want to be influenced. This is what I see as Darrow.”

Producer Carmela Geer acquired the rights from Samuel French Co. and said that theater companies around the country are staging revivals of the play.

“There is no dust to blow off it. The story is just as timely now as it was then,” said Geer. “It very much confronts the issues that are very contemporary today.”

“Yes, he battled, he fought 130 years ago; anything from unions, the labor movement and race relations to Creationism vs. evolution. He battled them a long time ago. Again, we are seeing nothing new under the sun,” Reimer said.

A single unit set will be divided by chairs, desks and a witness stand. One area will be Darrow’s home, another the inner workings of a trial, another a cluttered office.

“It’s a historical character, probably the most prominent lawyer this country has ever seen, both famous and infamous, depending on what side you were on,” Reimer said. “If you were big business, the railroads, he was anathema. If you were for the workers, at a time when men were working, all day, seven days a week, he cut the work day back to eight hours. The operators thought that cutting time would be less productive. Workers actually produced more and more profits were made.”

Corollary plays about Darrow have also been in vogue. The Ocean State Theatre in Warwick just ended their rave run of “Inherit the Wind,” based on the Scopes so-called monkey trial of 1925, which Darrow litigated.

Reimer leads a group that read that play two months ago on Tuesday evenings in Newport at the King House.

“I hope all sorts of people come, all ages,” he said. “This is not the senior center doing a senior citizen play. That’s not what this whole black box theater is about. It’s a theater and we are open to any and all ages getting involved in any aspect of the production. It just happens to be produced at Edward King. It is a play about people and it is a play, ultimately, about love.”

“It relates to our mission at the senior center to see a quality theater experience at affordable prices. It’s not here all the time,” Geer said. “[Theater] is here two times a year, fall and spring, and then it disappears.”