The Newport County Branch of the NAACP will be presenting an annual memorial service in honor of the men of the First Rhode Island Regiment, “The Black Regiment,” on Aug. 27 at 3 p.m. at Patriots Park in Portsmouth.

There’s more than one way to view the latest issues inciting protests and riots across the country.

Keith Stokes, a local African American heritage historian and longtime Newporter, believes the conversation should focus less on whether or not Confederate memorials and reminders of the slave trade should be removed, and more on telling the stories of African American men, women and children who have shaped the nation’s history and have not been properly recognized.

“These amazing stories are invisible,” Stokes said in a recent phone interview, “which is why I’ve been working so hard to bring African heritage to the forefront. The more people can see and appreciate this history, they more they will understand history.”

Following the Aug. 12 white nationalist rally and counter-protests in Charlottesville, Virginia, which left three dead and 35 injured, along with the “free speech” rally on Aug. 19 when 40,000 anti-racist protesters descended on the Boston Common, history and understanding, it seems, are at a premium. In Newport officials are hoping to bridge the gap despite the city’s sordid history as a slave port. 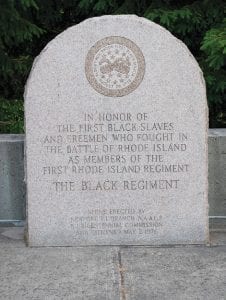 Back in June, the Newport City Council unanimously voted to honor Africans who died during the transatlantic voyages during the slave trade along with those who survived and became a key part of Newport’s economy and culture by erecting a memorial in Liberty Square on Marlborough Street.

In the 1600s and 1700s, local slave owners purchased the slaves for plantations, Middletown farms and to serve as craftsmen in Newport. Those who were not sold were put to work aboard merchant ships. Newport became the colony’s leading slave port, bringing an estimated 59,000 slaves to America before the American Revolution.

The Liberty Square monument was initiated through a local chapter of a nationwide nonprofit called the Middle Passage Port Marker Project, which is working to place historical markers in port communities like Newport. Once the local chapter completes the design, the council will vote on on a final approval. 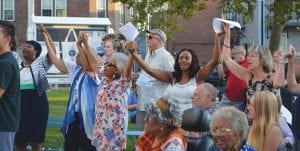 A diverse crowd of nearly 100 attended a prayer vigil for peace and unity at Newport City Hall on Aug. 20 where Pastor Paul Hoffman of Evangelical Friends Church of Newport, the organizer of the event, was joined by six reverends from churches in Middletown and Portsmouth. (Photo by Lynne Tungett)

J. Clement Cicilline, vice president of the NAACP Newport County Branch, said that while racial injustices and inequalities have improved locally and there is more recognition of African American heritage, he still gets occasional complaints. Once a complaint is received, a committee is appointed to investigate the matter.

“We’re certainly not overwhelmed with it but that’s not to say that there aren’t problems as these things happen and often go unreported too,” Cicilline told Newport This Week. “We respect freedom of speech but when it’s pro-hate speech and divides us instead of bringing us together, we have to speak up.”

He said the local NAACP branch is particularly concerned about how it affects children and hopes to work with the school system to ensure that equality, social justice and tolerance are taught in an effective way to students in the community.

“We’re not picking on our schools so much as wanting to work with them,” Cicilline said. “These very lessons need to be reinforced every year. It’s got to be in the school system from top to bottom, not just a feel-good course in the third grade.”

Stokes said a state historical commission in 2015 was charged with developing a comprehensive African American history curriculum for all K-12 public schools in Rhode Island. At this point, he said it’s unclear where that effort stands and that, in light of recent events like the violence in Charlottesville, such an educational initiative is more important than ever.

One such story Stokes believes should be taught in local public schools and recently shared with Newport This Week is that of George Downing, an African American who moved to Newport as a young man and worked tirelessly for labor rights and public school integration in the late 19th century. Considered a visionary business leader by those well versed in local African American heritage, Downing brought a restaurant and hospitality service to the coastal community in 1844, and by 1857 was well established as the proprietor of the Sea Girt luxury hotel.

Because of his success, Downing opened catering businesses in Providence, Boston and Washington, D.C., and worked as official manager of the dining room for the U.S. House of Representatives. Interacting often with business and political leaders, he was able to speak of his opinions on the abolition of slavery, school integration, and the advancement of economic prosperity for newly freed slaves and advocated for workers’ rights and racial equity.

In 1869, Downing gave an impassioned speech stressing the importance all three promises the Declaration of Independence offers all American citizens, those sacred and undeniable rights to the “… preservation of life, liberty, the pursuit of happiness.” He firmly believed that African Americans had earned those rights by surviving slavery and made the case that by organizing under the union labor banner, they could fulfill their rightful place as full American citizens.

Stokes said Downing is a stellar example of an African American leader who led the fight for happiness and prosperity in America. Stories such as his must be highlighted and integrated into curriculum for students across the nation, he said. Because Newport is steeped in African American history, Stokes thinks the conversation and education should start here and expand outwardly.

“We need to help bring Newport into the forefront of sharing this history,” Stokes said. “If our children in elementary school learned about stories such as Downing’s, I think they would be less bigoted toward those who might look, worship and speak differently. It’s our shared American heritage, warts and all. Some will agree and others will disagree with me but it’s far better to begin a dialogue about it than starting a riot.”