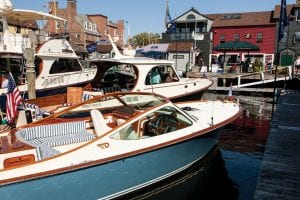 The Newport Wooden Boat Show at Bowen’s Wharf is a new expansion of a citywide event that encompasses over half-mile of Newport waterfront. There is no admission charge to view or board the array of wooden boats in the water at Bowen’s Ferry Landing marina.

Fourteen teams from Argentina, Australia, Great Britain, Hong Kong, Ireland, Japan, Sweden and the U.S. are heading to Newport for the fifth edition of the biennial Rolex Invitational Cup, held Sept. 12- 16. Hosted by New York Yacht Club and raced in the identical Swan 42’s, the Rolex Invitational Cup has been held in Newport since 2009.

Royal Thames Yacht Club will be returning to defend their title from the 2015 edition of the regatta, after becoming the first club from outside North America to claim this prestigious trophy.

Boats and sails are provided, and the rig tune is standardized across the fleet. The race has strict eligibility rules to ensure each team is comprised almost exclusively of amateur sailors who are members of the clubs they represent.

The Newport International Boat Show and the Newport Wooden Boat Show will be held concurrently in Newport, Sept. 14-17 from 10 a.m. to 6 p.m., ending at 5 p.m. on Sunday Sept. 17. Newport’s waterfront will be buzzing with new boats, old boats and many boating and marine accessories. Bowens Wharf will be the place to view handcrafted motor or sail boats.

Tickets are available at gate, or online at newportboatshow.com/ index.php/tickets/.