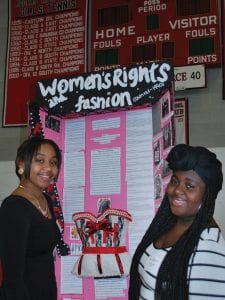 Na’Ila Abdus-Salaam and Samantha Beckford examined the evolution of Women’s Rights and Fashion for their history project. (Photo by Pat Blakeley)

The gym at Rogers High School was a flurry of activity Wednesday morning as the entire junior class quieted the butterflies in their stomachs and prepared to meet a panel of judges – judges from the community who would evaluate their projects on Rights and Responsibilities and the positions they took on the issues. It was National History Day at the school, and the students, who had spent months on research and preparing their presentations, were ready to launch.

Social Studies Department Chair Coleen Hermes says that the longterm project makes history come alive for students by engaging them in discovery of the history, culture, and social experiences of the past.

Hermes believes that one of the most valuable aspects of the project is that the students, many for the first time, have to stand up in front of adults from outside the school and present cogent thought – and be prepared to defend their thesis.

Judges come from the naval station, local colleges, civic organizations, and the citizenry at large. City Councilor Justin McLaughlin has judged for five years and wishes everyone had the opportunity to see the projects. “This is a great chance to see how young people feel about these issues. They are impressive,” he says, adding, “This is what education is all about.”

More than half a million students from across the country compete in National History Day annually; Rogers High School has been participating since 2008, and every year at least one student has made it to the national finals.

All juniors participate in the History Day project, beginning with a research paper due in the fall. Before Christmas, students decide what type of presentation they will do for the competition; they can choose from exhibit, website, documentary film, and performance categories. Hermes points out that the school supplies the materials and equipment needed “to level the playing field for the kids, so no one student has a real edge over any other.” The results have been remarkable.

The Navy League’s Mike Slein was particularly impressed by a project on Jimmy Carter and the Iranian Hostage Crisis, by Ireland Barta and Haley Kennedy. “I was in the waters off Iran for a year while this was going on,” he commented, adding, “These projects get better every year.”

Since every junior is required to take U.S. history, each has a teacher who monitors their progress, making sure they stay on track. Most of the work is done outside the classroom, Hermes says, but they can devote class time on the projects if needed. Some students are very secretive about their work, offering few details, wanting a “big reveal” on History Day.

Jacob Bianci did his project on the National Park Service and created a wooden tri-board decorated with real bark to serve as a background platform, aiming for that “wow factor.” Alex Caparas made a replica of the Resolute desk in the Oval Office as part of his group exhibit on the American Presidency, complete with props – including a rug embossed with the presidential seal.

Students can compete as individuals or in groups, with two winners selected in each category to move onto the state competition in April. State winners move on to the Kenneth E. Behring National History Day Contest at the University of Maryland at College Park in June, competing with the best projects from across the country.

“We have never won at Nationals,” notes Hermes, but says that in 2011 and 2012 Rogers students were selected to have their projects showcased at the Smithsonian, and their 2011 Brown v. Board of Education exhibit was recognized at the national level as the best from the state.

Students are often overwhelmed by the project – and the process – at first, Hermes says, but the faculty starts preparing them during their sophomore year. “We have the tenth-graders go to the fair and see what that year’s juniors are doing, just to get an idea of what is expected.” They see the excitement the project generates, but Hermes admits, “Many are pretty intimidated at first and need a lot of reassurance.”

Often, she notes, seniors will come in and help the juniors, sharing insights gained during their own struggles. That, according to Hermes, is most helpful to the students, and the seniors’ enthusiasm is catching. “There is nothing like hearing from a peer about how they overcame the same obstacles,” she adds.

The experience of presenting in front of a diverse group of judges, each of whom asks probing questions about the material, can be daunting, Hermes says, “But we practice, practice, and practice again. By the time History Day rolls around,” she smiles, “they are more than ready.”

The last few weeks before the judging are pretty intense, she observes, and excitement builds, even among the most reluctant students. “It is almost funny,” she laughs, “the project becomes something they love to hate.”