Local Man On A Mission 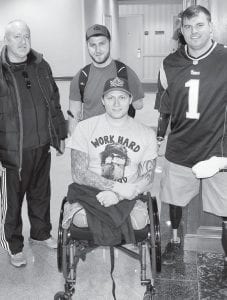 For Newport resident Mike Tobiassen, it all began as a simple request from his 20-year-old, combat wounded son Alex, less than three months ago. Since then it has turned into the mission of his life. The younger Tobiassen was a resident of a Wounded Warrior transition program at Ft. Belvoir, Va. when he viewed an inspiring documentary about combat-wounded and quadruple amputee Travis Mills. Mills, a staff sergeant with the 82nd Airborne, was horribly wounded in Afghanistan in August of 2012. Despite the loss of parts of all four of his limbs, he inspired other wounded service members with his grit, tenacity, and unfailingly upbeat personality as he fought to regain control of his life. Alex felt that if Travis could overcome his devastating injuries, he too could beat the wounds he suffered. For both Tobiassens, it was also an opportunity for average Americans to see the sacrifices that members of the military make on a daily basis and to honor the families of those folks in harm’s way.

A story about Travis Mills was featured in a recent issue of NTW.

In what became a story of a father’s love conquering all, Mike Tobiassen moved heaven and earth to bring the documentary to Newport in November, honoring his son’s request. However, after meeting with Mills, his wife Kelsey, and two-year-old daughter Chloe, Tobiassen decided he needed to do more – much more. “Like most Americans, I was aware that our country was at war and that there were service members who were dying and being wounded. That saddened me­­, but it didn’t touch me personally because I didn’t know anyone who had children in the military until Alex joined the RI Army National Guard” Tobiassen said. “I thought that by bringing the film to Newport and by helping Travis my work would be done, but then I realized I couldn’t just leave it up to someone else to pick up the baton and carry on the work. I knew I couldn’t sit back and just let it go on with the hope that others would continue. I had to stay involved.”

Tobiassen’s involvement took him to the Capitol in Washington, D.C. for a congressional screening of the documentary, where he chatted with any member of Congress he could find. He also contacted business associates and friends to help with issues facing wounded warriors and established a non profit foundation, Friends of Walter Reed Hospital Inc. “We are taking Travis’s movie around the country and screening it to raise funds for the Travis Mills Foundation. This will help the Mills family build their home and establish a wounded warrior winter recreation park in Maine, which will allow veterans to ski, bobsled, hike, toboggan, and enjoy other winter sports with their families and other combat-wounded vets. The Governor of Maine and a number of other agencies are assisting the Mills with their project. We want to create awareness of the sacrifices that our service members are making on a daily basis. We are hoping to inspire people because everyone faces difficulties in their lives, whether it’s the loss of a loved one or any of the multitude of issues human beings face,” Tobiassen explained.

Tobiassen’s nonprofit has been established with the help of veterans’ organizations that include the Iraq and Afghanistan Veterans Association and the Wounded Warrior Project. “We are aware that many of our wounded and badly-burned veterans will need caregivers for the rest of their lives and we want to help them with funding that will add to their government supplements. We want to help them build or retro-fit their homes to accommodate their new situations in life. We want to assist them in becoming self-sufficient and capable of independent living.”

During a recent New England Patriots football game with the Denver Broncos, Tobiassen arranged for Mills and two other wounded warriors to be honored for their service and sacrifice at Gillette Stadium. Mills was accompanied by Taylor Morris, a quadruple amputee and former member of a Navy Explosive Ordinance Detachment, and Navy Seal Bo Richenbacher, who lost both legs above the knees. “The Patriots’ organization showed a two minute trailer for the documentary on the stadium’s ‘Jumbo- Tron’ and the three young veterans were given a standing ovation by the crowd when they walked out onto the field. That was a special day and we raised a lot of awareness just by the guys being there and standing up for this country,” said Tobiassen. “It took a number of people to put that day together. Dave Rogers, a former Navy Seal, and Travis’s father-in-law Tom Buck were with us to support the boys. Peter Barry, of Barry Automotive Group, lent us a comfortable van to use for our trip from the airport to Newport and then to the game and back. Sergeant Chris Hayes of the Newport Police Department gave us a police escort to the Rhode Island Massachusetts line, where the Massachusetts State Police met us and escorted us right to the stadium. It was a fitting honor for these men who have given so much of themselves.”

When asked recently if he thought that he would become this deeply involved in these projects so quickly, Tobiassen answered, “I haven’t really thought about it. I guess we just do it and hope that our best efforts can help those who need it now and for years to come.”

Tobiassen is committed to this new mission in life. For further information, volunteer opportunities, or donations contact: friends ofwrh@gmail.com