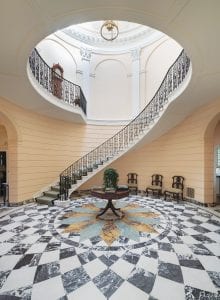 Bellevue House c.1910 is among the seven properties that will be featured on the St. Michael’s House Tour later this month. (Photo by Nat Rea)

As a repository of significant works by some of this country’s most important architects, Newport could rightfully be considered the “Metropolitan Museum of American Architecture.” The city is also the home of many buildings from each architectural era, from the settlement of North America by Europeans in the 17th century through the Art Deco movement of the 1920s. The 2014 St. Michael’s House Tour on Sunday, April 27 will provide a concentrated sampling of Newport’s architectural offerings and will showcase tastes of different periods.

The Paradise Farmhouse, newly renovated to accommodate public overnight stays, represents colonial and early vernacular architecture. Buildings such as this one, modest in scale, were constructed out of local materials by nameless craftsmen relying upon generations of passed down knowledge and technique. There are few places in America that maintain as much early era architecture as the three Aquidneck Island communities. 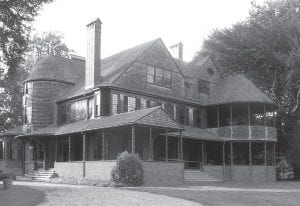 The Isaac Bell House by Stanford White is a stellar example of shingle style design. (Photo courtesy of A4 Architecture)

Ossory House, located at 15 Berkeley Ave., represents the quintessential Victorian era style: mansard roof, ornate porch brackets, and simple cubic volume. Although located off Bellevue Avenue, this building, designed by noted Newport architect George Champlin Mason, is a wonderful example of the style of house that dominates the Kay Catherine neighborhood where so many of his buildings were constructed from 1860 to 1880.

The Arthur Emmons House at 300 Gibbs Ave., also known as Hillside, was designed by the noted Boston firm of Peabody and Stearns and represents the next architectural era of Queen Anne style. This grand house, designed in 1882, is a large rambling structure. Drawing cues from the vernacular buildings of earlier eras, Queen Anne is characterized by free and eccentric detailing and asymmetric massing, as if the building had grown naturally in pieces over time. Like many other buildings done in Queen Anne style, the house has a tall tower element and large porches. It has been lovingly restored on the interior to showcase the extraordinary wood panel detailing. 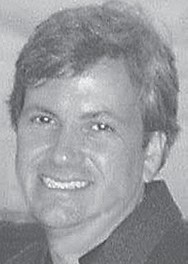 Ross Sinclair Cann, AIA, LEED AP, holds degrees from Yale, Cambridge and Columbia and is a historian, educator and practicing architect living and working in Newport.

In 1884, just two years after bursting onto the architectural scene with the design for the Newport Casino (which was the first building that McKim, Mead and White designed together as a firm), the Isaac Bell House solidified Stanford White as a design talent to be reckoned with. This building is often held up as the flowering of what has become known as the shingle style. Similar in many ways to Queen Anne style, the shingle style was named by the architectural historian Vincent Scully for the creative and artistic use of cedar shake shingles which had long been employed in New England vernacular architecture. But in the hands of a creative talent like Stanford White, the masses and surface treatments became a tour de force of architectural composition. The Bell House is also emblematic of the early Gilded Age period in that it is large but in many ways unpretentious and understated, adhering as it does to colonial materials and architectural elements.

Remarkably, just two years later, McKim, Mead and White designed the Commodore William Edgar House (today known as Sunnyside) at 25 Old Beach Road. In contrast to the Isaac Bell House, this struc- ture introduces Doric columns, Palladian windows, and many other overtly neo-classical components into the composition. As wealthy new summer residents built homes in and around Newport, each year the structures became larger and more formal as their owners sought more secure positions on the social ladder. Stanford White’s versatility in being able to transition from the eccentric and Asian-inspired Bell House to the grand and classical Sunnyside estate shows his great breadth of knowledge and facile design skill.

Bellevue House, designed in 1910 by Ogden Codman for his elderly aunt Martha Codman, illustrates how far this formality extended as the Gilded Era waxed and waned in the period prior to World War I. This house, Federal Revival on the outside, is overtly classical in its symmetry and formalism. Upon entering the structure, the symmetry continues with the plan being based largely on a three-by-three grid. The middle square, almost like a Fabergé egg hiding a grand surprise, is occupied by an immense three story atrium and stair with delicate Adams style decoration. Codman was a collaborator with the great Newport writer Edith Wharton, whose first book, “The Decoration of Houses,” is still in print today more than 100 years after its first publication.

It is fitting that the tour also includes Wind Shadow at 320 Harrison Ave., designed by Ron DiMauro and built between 2003 and 2004. It shows the influence that earlier architectural styles still hold on contemporary clients and their designers. These adjoining buildings could be called “contemporary shingle style” or postmodern in that they use the traditional language of the 19th-century summer cottages, but in a sly up-to-date way. The stacking of square window units into a pyramid and the use of a three part Palladian-like window (but stripped of the traditional trim detailing) are cues that the structure is of late 20th- or early 21st-century origin.

Every day in Newport is a tour through the centuries of American architectural history. But it is a special treat when the owners of homes that are generally seen only from a distance (if at all) open them up for closer inspection and admiration. Seeing the inside, one realizes that architecture is the work of many: the client who provides direction and program, the architect who gives it shape and form, the interior designer who clothes the design in colors and fabrics, and the landscape designer who provides the setting. Hopefully the upcoming tour will refresh the eye and stimulate the imagination.