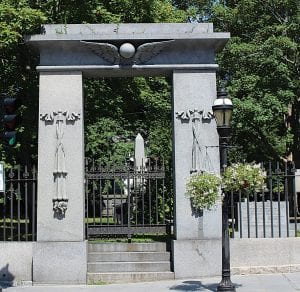 The historical, Jewish burial ground will be opened to the public on Aug. 20 to see the tombs and inscriptions inside. (Photo by Joseph T. O’Connor)

It inspired poets Henry Wadsworth Longfellow and Emma Lazarus, who each walked its splendid grounds before writing to each other about its reverential aura. On Sunday, Aug. 20, it might inspire others.

For one day, the Colonial Jewish Burial Ground, a fenced-in plot of land that holds the remains of the most noted Jewish residents of Newport, will open its stone façade and wrought iron gates to the public.

The historic site, shaded by several impressive trees, across from the Hotel Viking at the intersection of Bellevue Avenue, Kay Street and Zion Place, will be open from 11 a.m. to 3 p.m.

The public is invited to this once-a-year opportunity to view what Longfellow called “These sepulchral stones, so old and brown/ That pave with level flags their burial-place/Seem like the tablets of the Law, thrown down/And broken by Moses at the mountain’s base.”

The small cemetery features an Egyptian revival entrance and gravestones for Newport’s first Jewish community. While the majority of the stones are in the same style as other Colonial stones in New England, many are lettered in Hebrew, Latin, Spanish, Ladino and English.

This is the final resting place of Aaron Lopez, one of the wealthiest men in Colonial Newport, as well as Moses Sexias, the author of the letter that welcomed George Washington to the city in 1790 and prompted his historic response, which is on display at nearby Touro Synagogue.

The site was purchased in 1677, and expanded in 1768. A stone near the entrance reads, “Among the Known Mortal Remains interred within are the following noted Newport families: Abraham Touro, Judah Touro, Moses Levy, Aaron Lopez and Moses Sexias.”

Longfellow discovered the burial site almost by accident, while on vacation from Cambridge, Mass. with his family. Lazarus’s family had a summer home in Newport.

According to the Touro Synagogue website, “While both Longfellow and Lazarus wrote of the lost community in Newport, they did so from very different perspectives. Longfellow wrote with the cynicism of age and as an observer outside of the community. Lazarus addressed the same subject from the perspective of youth and as one who was raised within the Jewish community.”

Over time, Lazarus and Longfellow exchanged letters. Following his death in 1882, she eulogized him in “The American Hebrew,” citing his Newport poem.

Guides will be at the burying ground to answer questions and provide additional information about the site. This is a free event.