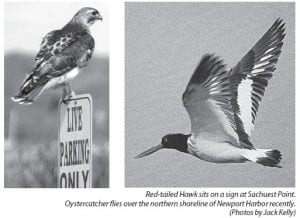 Each year during the spring and fall, billions of birds migrate to and from North America in one of the greatest wonders of the natural world. Newport County has the good fortune of being nestled along the Atlantic Flyway, one of our continent’s four avian corridors. In the next six to seven weeks, scores of species, numbering in the millions, will pass through Aquidneck Island’s varied habitats.

Responding to primal messages triggered by the lengthening daylight hours, the majority of birds will travel to ancestral nesting grounds across Alaska and Canada, including the Nunavut territory in the Arctic. Although many are transients, many species will spend the next five months nesting and raising their young across our area.

Scientists and biologists do not fully understand the mysteries of how birds navigate to their ultimate destinations, but there have been breakthroughs in recent decades. It has been discovered, for example, that some use visual clues to orient themselves, such as the position of the sun by day or the stars by night. 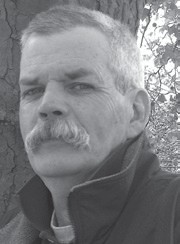 Others are known to use polarized light or the earth’s electromagnetic fields in finding their way. Still others, such as geese and some ducks, learn the routes by migrating with their parents and the rest of their flock. It is believed that they can recognize certain rivers, coastlines and mountain ridges.

However, there is a general consensus that nature imprints most birds with innate or genetic migratory skills. Year after year, these instincts help them arrive at their proper nesting grounds, often within yards of where they were raised.

In spite of recent snowstorms and below average temperatures, spring migration is slowly under way. The wintering residents of Aquidneck Island, including waterfowl, seabirds, songbirds, and raptors will soon move north as nesting birds take up their summer rotation here.

A unique shorebird that has recently appeared in the area is the American Oystercatcher, which has been sighted foraging at low tide along Newport Harbor. These husky specimens nest on Rose Island and search for oysters, clams, mussels, and crabs along local intertidal areas and rocky beaches. They also frequent soggy farm fields to feast on earthworms.

The average adult American Oystercatcher is 17.5 inches long and has a wingspan of about 32 inches. Both sexes are brown above and white below, with pale yellow legs. They have a black hooded head, bright yellow eyes, and a stout red-orange bill that is perfect for prying open shellfish. They present a heavy-headed and broad-winged profile in flight.

Another species making its much-anticipated return is the endangered Piping Plover, which has nested on Sachuest Beach and Third Beach in past years. A pair of these birds arrived at Sachuest Beach last April and established the first successful nest in four seasons. Of their three offspring, two survived to fledgling status and migrated.

Unfortunately, the Piping Plover has lost many Atlantic coastal habitats to development and erosion. The nesting birds that do remain are easily disturbed by beachgoers and predators. Over the past two decades, efforts have been made to minimize disturbances so that regional populations can stabilize.

The average Piping Plover adult is 7.5 inches long with a wingspan of about 19 inches. The bird is very pale, with a color matching the sandy and rocky habitats it frequents. Breeding adults have gray plumage above and white below, with a black neck ring, a light face, and a black “eyebrow” between their eyes. They boast a thick, black-tipped orange bill and vivid orange-yellow legs.

As with many shorebirds, the young of this species are precocial, meaning that they are covered with down and are capable of moving about when hatched. They often follow their parents to the water’s edge to forage. This is a very dangerous time for the hatchlings, as they are about the size of a cotton ball and can be easily stepped on by beachgoers. The chicks need to feed constantly in order to survive and grow. Disturbances will cause them stress and possible death.

These two breeds are only a hint of things to come as the seasons change. Their return reminds us that the warmth and renewal of spring will be quickly upon us.

Ryan Kleinart of the U.S. Fish and Wildlife Service will conduct a training session for current and prospective Piping Plover monitors on Saturday, April 12, from 1-2:30 p.m. at the Kettle Pond Visitor’s Center, 50 Bend Road, Charlestown, RI. Anyone interested in volunteering for the monitoring program is asked to attend.

According to Kleinart, “Volunteers play a vital role in helping the USFWS mission of conserving, protecting, and enhancing America’s fish and wildlife, as well as the plants and habitats on which they depend. Piping Plover volunteers help to protect nesting territories, educate the public on plover biology and local laws, monitor beaches, and document activities at nesting sites. Last year’s volunteers at Sachuest Beach did a great job and assisted the nesting plovers in so many ways.”

For more information, contact Kleinart at 401-364-9124. USFWS Volunteer Coordinator Sarah Griffith is also available for assistance at sarah_ lang@fws.gov or 401-847-5511.