Arts and Artists in the Spotlight 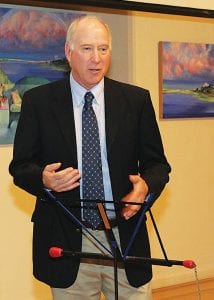 At the Arts and Cultural Alliance of Newport County (ACA) annual meeting at the Newport Art Museum on Monday, May 12, the arts and local artists were in the spotlight. The evening’s program began and closed with dance routines by the Rhode Island Ballet Theatre and welcoming remarks were offered by Terry Dickinson, ACA president, Lisa Goddard, Newport Art Museum executive director, and Peter Sterling Turner, ACA Vice-President. Aaron Abrahamson Cote, Newport Bridgefest Director, gave an update to activities planned for July 28 – 31. He described plans for busking at Bowen’s Wharf, film screenings, dance performances, and an arts and fine crafts show at Trinity Church. Cote enthusiastically stated, “We want this year’s Bridgefest to be more than just music.”

Alan Bernstein was recognized for his significant contributions to Newport’s arts community with the Dominique Award. Bernstein will be retiring this year after facilitating the arts for more than 25 years in the Newport Public Schools. He humbly accepted the award saying, “Thank you to Newport for allowing me to do what I enjoy doing.” 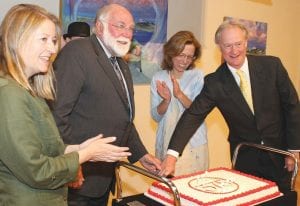 Keynote speakers Governor Lincoln D. Chafee and Senator M. Teresa Paiva Weed both stressed the importance of the arts in the Rhode Island economy. Chafee stated, “We are on the rebound and the arts is part of it.”

Chafee also mentioned the upcoming $35 million bond issue which includes $5 million for historic preservation grants, “We need your help in advocating for these investments in the budget.”

On a more local note a cake for Newport’s 375th anniversary birthday celebration was wheeled out, ceremoniously cut and then enjoyed by everyone at the reception following the program.