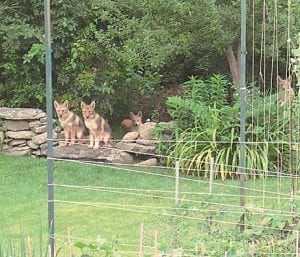 The number of coyotes in a pack is linked to the available food supply.

One of the truly emotional issues that has surfaced on Aquidneck Island in the past 10 years concerns the local coyote population and the potential public safety issues the animals present. This clever and intelligent species can adapt to any rural, urban or suburban environment. How to address this complex situation has long vexed local and state leaders, as well as the island’s law enforcement agencies.

In 2005, the Narragansett Bay Coyote Study (NBCS) was established in an effort to understand the explosive growth of the coyote populations on both Aquidneck and Conanicut islands, and the upsurge of bold and sometimes threatening behavior associated with individual coyotes. The NBCS conducted a wide-reaching survey and scientific probe that revealed some startling results and conclusions. Chaired by lead scientist and biologist Numi Mitchell, Ph.D., a dedicated team of scientists, biologists, educators and volunteers gathered a treasure trove of biological data and behavioral observations. By capturing individual coyotes and using collars outfitted with state-of-the-art GPS technology, the group was able to track the animals and record numbers and pack territories. 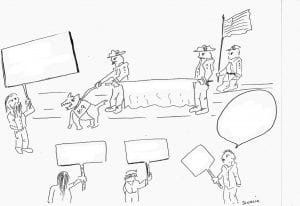 According to Mitchell, “We were barely into the study when it was discovered that human interaction with the animals was causing the problems that existed. Humans were directly or indirectly providing food to the coyotes and subsidizing their diets. The data we recovered indicated where packs were congregating and gave us clues as to where they were being fed, or where inadvertent food sources such as unsecured garbage cans, dumpsters or other artificial food sources were located. These circumstances were leading to smaller, congested pack zones, which don’t naturally occur, and a larger number of packs on the island. We immediately began an education program in the most affected areas to warn residents about the dangers of feeding wildlife, and the public safety issues to humans and domestic pets caused by attracting the coyotes into residential neighborhoods. By limiting the animals to a more natural diet, it would force them to increase their territories and the natural processes of territory and food protection would take over, forcing the coyotes to limit their own numbers.” 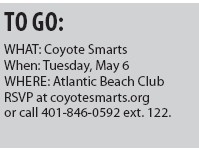 The issue of domestic pet safety was also addressed by Mitchell. “Leaving pet food outside or feeding cats and dogs outside of residences offers a temptation that coyotes will not pass up. We have had issues with large, feral cat feeding areas, supported by wellmeaning folks, where the coyotes will go to feed on the numerous cans or bowls of food and then eventually the cats themselves. Cats are not natural prey for coyotes but this is a learned and undesirable habit, as the coyotes will hunt for cats wherever they live, including residential neighborhoods. Leaving small pets outside at night unattended may also encourage unwanted consequences.”

Unfortunately, some humans don’t see the inherent dangers of feeding coyotes. By augmenting the diet of coyotes directly or inadvertently, they are contributing to the increase in populations. Simply put, the more food female coyotes eat, the more fertile they become, which leads to larger, unnatural pup litters and, in turn, a larger coyote presence on the island. The NBCS recorded litter sizes of seven to eight pups during the probe. A normal coyote diet, not supplemented by humans, consists of fruits, vegetables, mice, voles, rabbits, deer, woodchucks, geese and ducks. A normal “wild litter” would be restricted to a smaller number of two to five pups, with an average of three pups. The average pack size is three to ten individuals and because the number of mature members of a pack are linked to the available food supply, all but one or two pups are forced out of the pack between the ages of nine and 11 months. These young coyotes become “transients,” forced to survive in narrow undefended zones between pack territories.

“Coyotes are born with an innate, genetic fear of humans known as the ‘fear barrier’ which causes normal coyotes to run from human presence and never to initiate contact with humans. Coyotes that receive food from humans lose this natural instinct as they begin to associate humans with food. The animals that cross the barrier become ‘habituated coyotes’ and can eventually become problem coyotes. These are the animals that exhibit bold behavior and can be a public nuisance,” Mitchell said.

In January 2010, after five years of exhaustive research, the NBCS released a detailed report and issued a practical, natural plan for dealing with the management of the coyote population. Titled “Best Coyote Management Practices,” or BCMP, this science-based and fact-driven plan was endorsed by the Potter League for Animals, Rhode Island Department of Environmental Management, Rhode Island Natural History Survey, and the Aquidneck Land Trust. It suggested the adoption of ordinances that made feeding wildlife illegal and an education program for the general public. It also made recommendations for the use of lethal force against aggressive, habituated coyotes.

In late autumn of 2010, a disturbing trend of pet attacks and bold behavior by problem coyotes in Middletown’s Paradise Avenue area began to emerge. Bordered by Aquidneck Avenue to the west, Green Avenue to the north, Paradise Avenue to the east and Easton Point to the south, this region was the nexus of coyote activity. Chief Anthony Pesare of the Middletown Police Department commented at the time, “We worked with Dr. Mitchell and her team to see what we could do to alleviate the situation. Her study and the results were very helpful. We will continue to work with Dr. Mitchell to implement the BCMP, because it is working.” What Mitchell found was that pups born the previous spring had been fed, sometimes by hand, by residents in the affected community. They had crossed the barrier and were habituated, problem coyotes, killing domestic pets and occasionally challenging residents of the neighborhood.

After a number of consultations and town meetings, it was decided that lethal force to cull the coyote population in that section of Middletown was needed and warranted. At Mitchell’s suggestion, Roland Bellotti, a skilled hunter and sharpshooter, was contracted by the town to remove the coyotes. Private residents also contracted Bellotti to remove additional coyotes. From April-August, 2011, Bellotti removed 23 coyotes from the Paradise Avenue neighborhood and an additional 20 from surrounding areas, for a total of 43. The cull had removed the problem coyotes and was thought to have removed all coyotes from the area. All three communities on Aquidneck Island have passed ordinances prohibiting the feeding of wildlife, and the towns of Portsmouth and Middletown have adopted the BCMP program.

In the fall of 2011, Mitchell was contacted to investigate additional reports of coyotes in the Paradise Avenue area, as the animals were seen moving through the neighborhood near dusk and marking their territory with scat. Observations led to the discovery that residents were putting out loaves of bread to feed gulls and crows near sunset. Unfortunately, the coyotes in the area discovered that not all of the bread was being eaten and this drew the animals to this particular neighborhood. Mitchell consulted with the residents and the practice was ceased. Soon thereafter the coyotes stopped their nightly forays into the region.

Through the use of GPS collars, camera surveillance, and observations by team members, it was found that there was a coyote presence in the areas where the culling had occurred, suggesting that either members of the pack had survived or transients had moved into the vacated space. “We don’t have definitive proof, but it appears that a number of the coyotes culled were transients and that the pack is still active in the area, albeit more cautious and existing on a natural diet,” Mitchell said.

Recently, the southern Portsmouth area has experienced a rash of pet killings and potentially bold coyote activity. Mitchell believes that these incidents link directly to individuals who are feeding coyotes either directly or inadvertently.

According to Deputy Chief Brian Peters of the Portsmouth Police Department, “We are working with Dr. Mitchell on this issue, and we are currently investigating reports of residents feeding coyotes in the Jepson Lane area. An educational program is being implemented to inform Portsmouth residents about the safety concerns involving their pets, and the dangers of leaving them outdoors and unattended at night. We want folks to realize that leaving pet food outdoors will eventually attract coyotes into the neighborhoods. With Dr. Mitchell’s information and our own investigation, we are hoping to resolve these issues soon.”

Potter League Executive Director Christie Smith explained, “At the Potter League we understand and recognize the impact that the coyote population has put upon all domestic pets and how human behavior has contributed to the coyote issues our communities face. Our various partners have been meeting and networking for months to produce a common information, education, and reporting website to assist with a common sense approach to the coyote situation. The website, coyotesmarts.org, will offer communities a tool for managing the animals.”

Mitchell is enthusiastic about the program. “As we initiate this effort to manage coyotes in our communities, we are pleased to have the valuable partnership of other organizations who value our mixture of rural and urban landscapes, and who understand the importance of living safely with the wildlife that is integrated within our communities.”